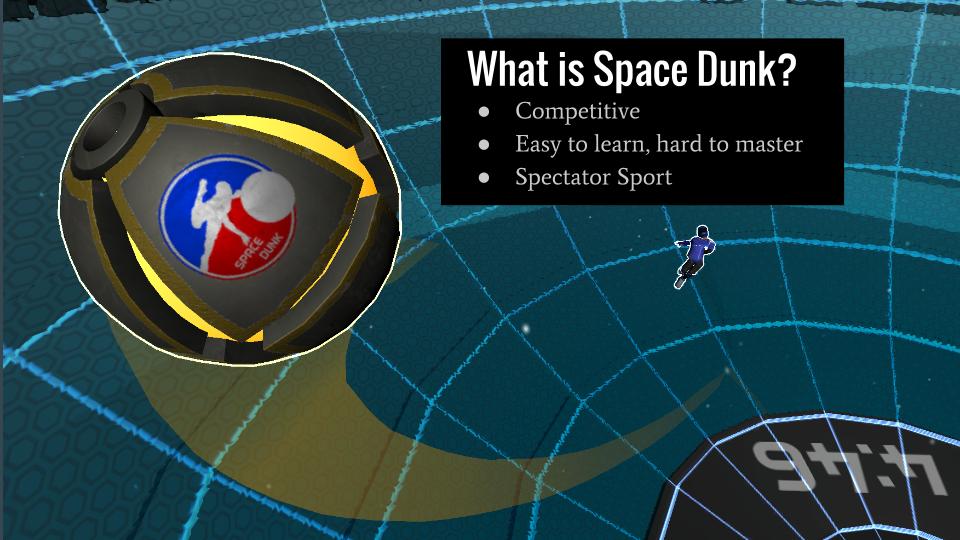 Space Dunk is the number one spectator sport of the future today, it is a first person zero gravity sports game where two teams battle over a golden ball that must be placed in the other teams goal.

The gameplay in Space Dunk can be divided into two different phases: offense and defense. The players uses boost to traverse the different arenas trying to grab a golden score ball. The score ball can be thrown through the opposing teams hoop for 1 point but it can also be carried through the hoop for 2 points, this is called a space dunk.

There are also blast balls the player can pick up (the green balls in the gif above) and throw at opponents to knock the score ball out of their hands and disorient them. The players also have a few defensive capabilities such as a shield. The shield can be used to block incoming blast balls if the player activates it at the right time. The shield has a short cool-down so that it can’t be spammed. The shield can not be activated when the player completes a space dunk or the dunk will not count.

To counter act the shield the players also have an emp burst, the emp is a blast that emanates from the player and pushes anything near the player away. The emp can also be used to deactivate an opponents shield or cause them to drop the score ball. The emp also has a cool-down but it is shorter then the cool-down for the shield.

As a level designer I wanted to create arenas that would foster different types of gameplay. One concept I created was inspired by half-court basketball. The level has a single hoop instead of two and the players must “take out” the score ball if they steal it from the other team.

Taking the ball out

As shown in the gif above the red team starts with possession but the blue player steals the ball. The blue team must then move out of the scoring area (shown by the big sphere) to take the ball out. Once the ball is taken out the blue team can move back into the scoring area and score. The scoring area is surrounded by a large sphere that changes color depending on which team has the ball. This was created to give the players more feedback as to who has possession of the ball. The shape of the arena is a torus, I decided on this shape because it is simple and open so the players would always know where they should be looking.

While working on the sound I used Logic Pro to create sounds I could rapidly create and modify sounds based on my teams feedback. I used a variety of synthesizers and analog instruments to get the sounds I wanted, I was focused on improving the player feedback through sound design. I also recorded voice overs for announcers to help reinforce the idea that Space Dunk is the number 1 spectator sport of the future. I also created a huge spreadsheet of all the sounds the game needed, all the file names of the sounds, and how far along the sound is.

Working on Space Dunk was a great opportunity to leave my level design comfort zone. I have created levels for competitive multiplayer games before but the levels I made where for games like Unreal Tournament which has an entirely different objective then Space Dunk. When designing levels for a Deathmatch focused multiplayer game you consider things like cover, weapon placement, and spawns. When designing levels for a sports game cover is unnecessary and there are no weapons. My early level concepts where very cluttered and over complicated, I started looking at different sporting events to get inspiration. I realized that what I needed to do was keep the levels open so the players can always see the goals and where the score ball is. This project was a blast to work on and I hope to continue working on this game in the future.