Korku is a co-op first person shooter where two players work together to control a single mech. The first player controls the mech’s movement and primary weapons, while the second player controls the heavy weapons and can buff different areas of the mech during combat to boost effectiveness.

In order to foster the cooperative spirit of Korku we placed both players in the same mech and gave them equally important roles, the players must work together to maximize their mech’s combat effectiveness and complete objectives.

The gameplay in Korku is divided among the two players: the pilot and the engineer. The pilot controls the movement of the mech and also controls the weapons on the arms on the mech (a shotgun and a laser). The engineer has heavy shoulder mounted weapons and a buffing mechanic, the engineer has a pool of energy that they can divert to different areas of the mech to buff attributes such as speed and health. The players must work together to stay alive and complete objectives.

The systems in Korku went through several iterations, the original concept was for a multiplayer arena deathmatch game. This original concept was going to have a focus of customizing the mechs and be multiplayer only, however we realized with the limited amount of time we had that this was out of scope. We decided to scope the game down to a co-op vs AI experience.

The gif above shows our earliest prototype, during this stage in the project we were still dividing the gameplay systems between the two players. This was a big challenge for me as the systems designer, I wanted both of the players to feel like they were contributing to the team at any given moment. I created several different systems and came up with three different ways to divide the systems among the players. 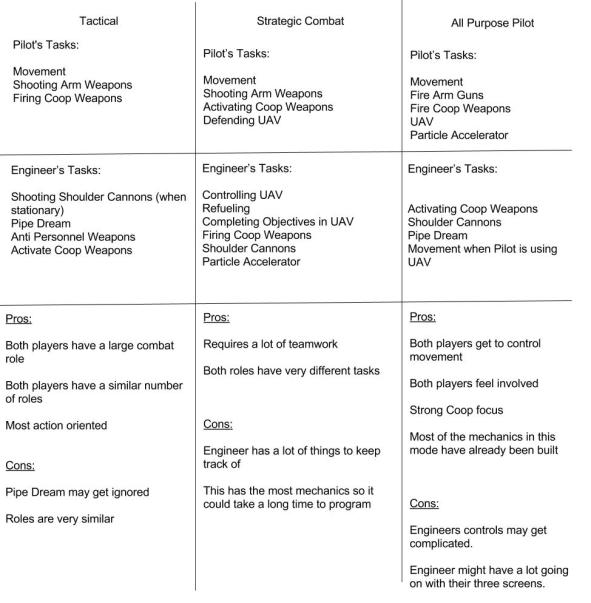 Early plans on how to divide the game systems

We brought each of the three divisions to QA testing, players really liked the Tactical and the Strategic variations and in the end we combined the two variations. We also decided to cut the UAV gameplay because we felt it over complicated gameplay. The next major change was revamping the engineers buffing mechanic. The original buffing mechanic was inspired by Pipe Dream, the engineer had to rotate arrows to change the flow of energy.

The blue arrows represent where the power is flowing and the squares with circles inside are different systems that the engineer can buff. This system was very hard to explain to new players and it also took players a long time to use, this made it so the player who was the engineer would end up focusing too much on buffing or too much on combat. We decided to streamline the buffing so it was quicker and easier to use. The new system we created gave the engineer a pool of energy they could divide among different systems (such as health, movement speed, damage, and fire rate).

In order to add greater emphasis on teamwork we decided to add a heat mechanic to the engineers buffing system. If the engineer uses too much power when buffing the mech the mech begins to overheat and the pilots laser weapon can’t fire.

When I was creating levels for Korku there were many challenges. The sense of scale was very important to the game, we wanted the players to feel like they were in a giant mech so everything else had to feel small by comparison. The objective of the level is to destroy a convoy before it reaches its destination and then get to an extraction point. In order to make sure the players see the convoy there is a large arrow above it, the players also exit the first major combat area (a city) when the convoy is passing the city so it is easy to see. Once the convoy is destroyed the players have several ways to get to the extraction point which also has an arrow over it after the convoy is destroyed. Creating the city at the start of the map required a lot of collaboration between my artist and I. My artist created a bunch of modular buildings that could be stacked to create tall buildings that looked different. I would make changes to the city area then send them to my artist who would give me feedback.

Example of feedback from my artist about the level design

This constant collaboration resulted in a much more polished level, the city was initially  very flat but after feedback from my artist I added much more verticality which helped the players know where to go in the level.

This project reminded me about the importance of collaboration with other people in different disciplines. The reason this level was so good was because i worked so closely with my artist. I had collaborated with artists before but this was the first time I worked so closely on a level with an artist. I also learned about the dangers of a networked game, we had the two players connected over a network and it lead to lots of problems during QA testing.