There are many different types of levels in video games, two very popular types of multiplayer levels are Symmetric and Asymmetric. Both of these types of maps have advantages and disadvantages depending on what kind of experience you want your players to have. Symmetric maps are very common in team based objective game types (such as capture the flag) since neither side will have an advantage due to where they spawn. This post will explore symmetric maps and the ways they can be compelling.

The Halo 3 map The Pit is one of my personal favorite symmetric maps of all time, This map is a great example of why symmetric maps are so compelling. This level was used for both deathmatch and objective game modes and was widely considered one of the best maps in Halo 3. The areas that both teams spawn in (represented below by the red and blue boxes) offer the players three major routes for player to get to the opposing teams base, there are more ways to get across the map however but the examples I am going to talk about are the most direct.

The spawns offer more then just a base for the teams to start in, both teams have sniper rifles at the towers beside their spawns. This allows skilled players to quickly begin an offense play or a defense play. The areas in front of the sniper towers are very open however there are many safe ways to maneuver around snipers. Each side also has a shotgun that can be used to defend in the close quarters of the spawn area. 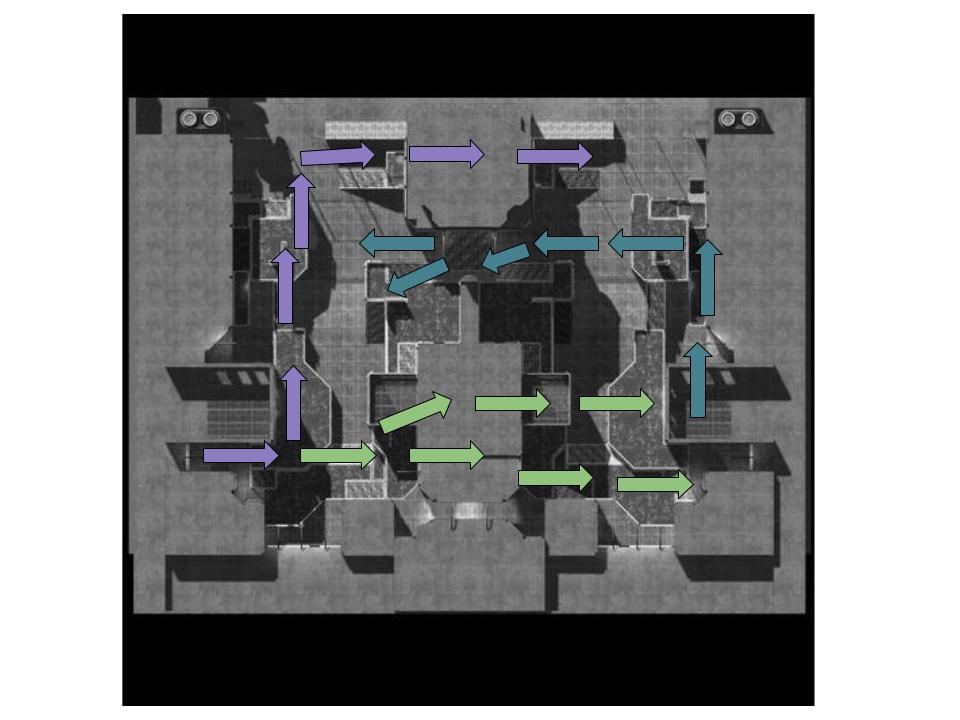 Figure 3 shows three of the many routes to get from one side of the map to the other. The purple path takes the player from the base past a sniper rifle, they then have two options: take the lower path witch is a long hallway with no cover or take the upper path which is a small square room. The hallway route is dangerous but also has a Overshield (a health power up), the hallway route is very quick and direct but it leaves the player exposed to a lot of enemy fire. The room route has very close quarters and also has an energy sword (one of the most powerful close quarters weapons in the game), this route offers more cover but it can be easily held down by one player with a close quarters weapon.  The Green path shows the routes that bring the player through the center of the map. The center of the map has a rocket launcher in the middle of a hallway, this area is easy for both sides to see and is often the area where the first kill of the game happens. The other hallway next to the rocket launcher has an invisibility power up which is very useful in objective game types. The blue route is the quickest way to get to the other side of the map but it requires the player to run at the other teams sniper tower this is very dangerous and there is not much cover available. This route has a few weapons but no super powerful ones, this route is more about speed then getting equipment. The thing that these routes all have in common is the center of the map has weapons and power ups that the players will fight over. The best symmetric maps (in my opinion) create reasons for the players to fight in the center of the map.